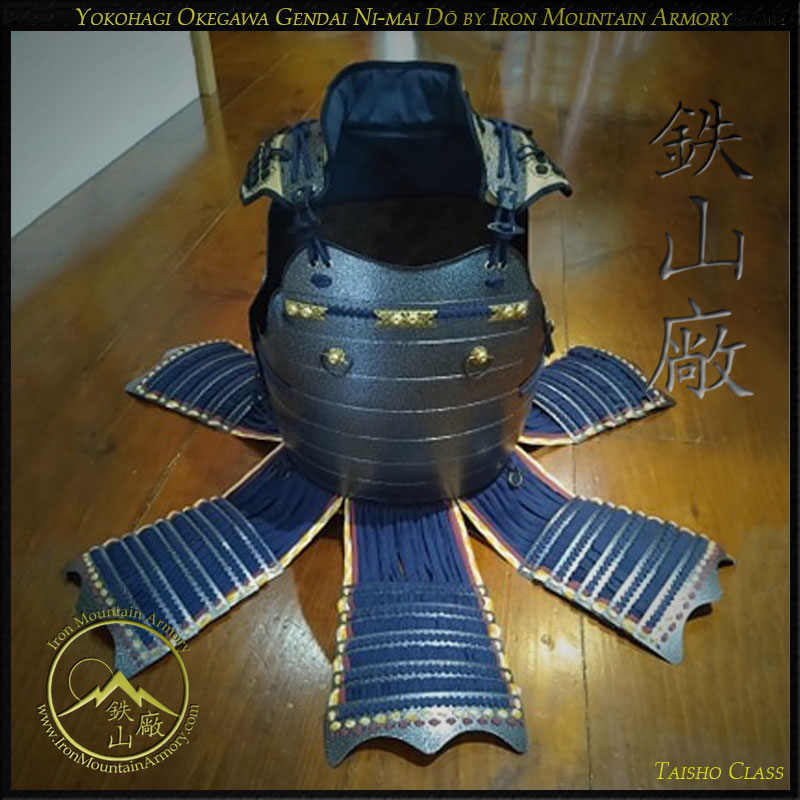 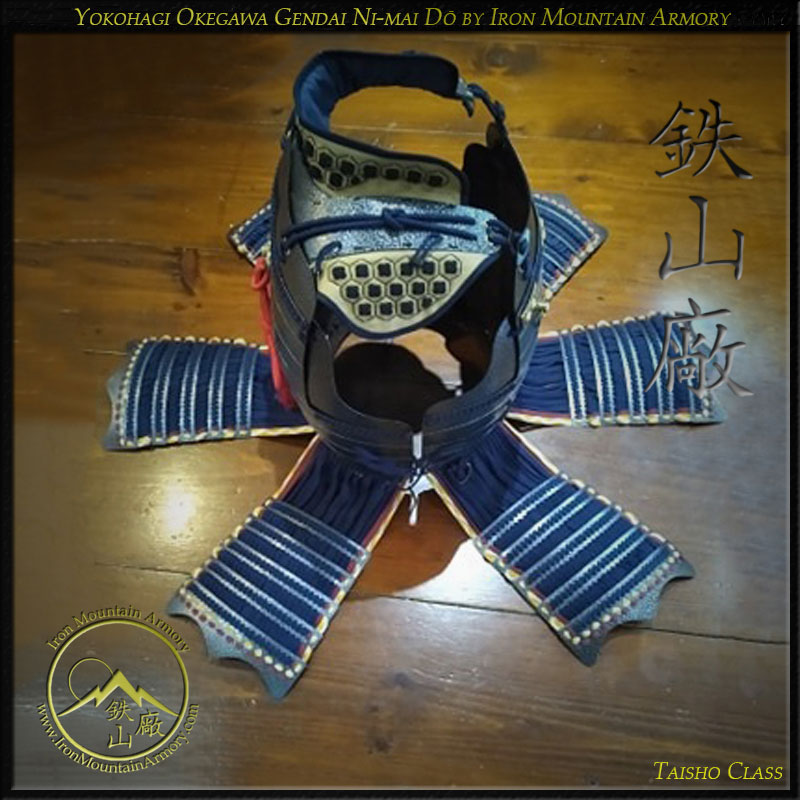 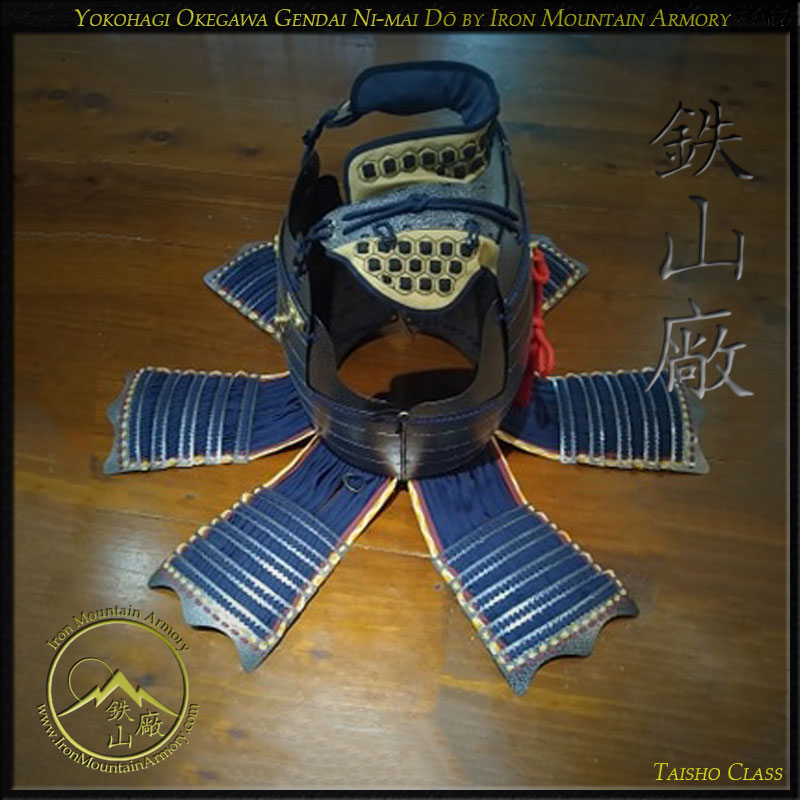 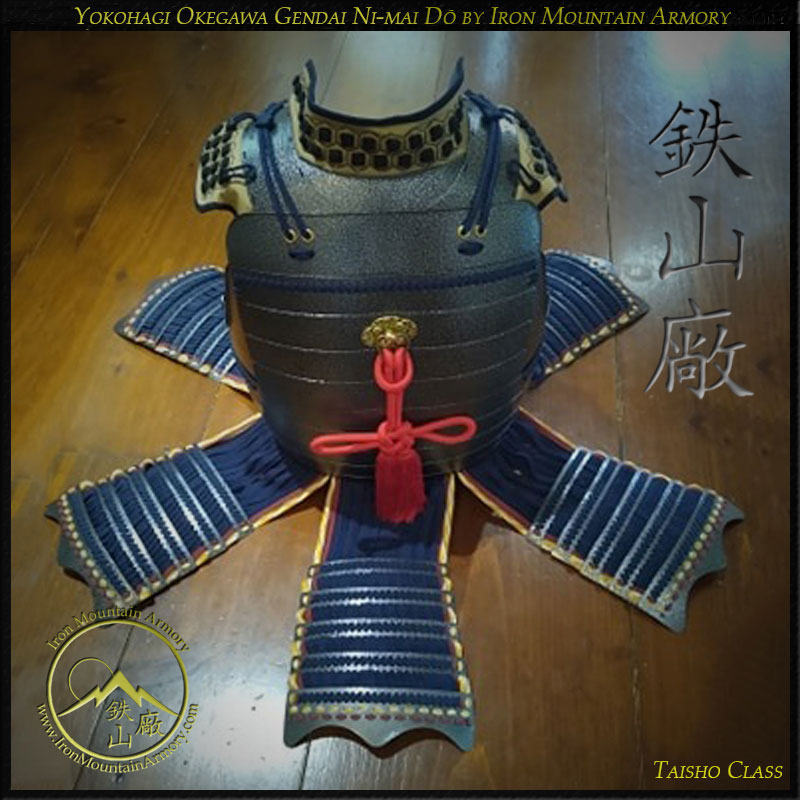 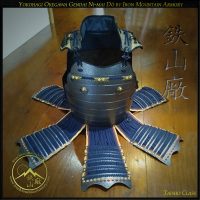 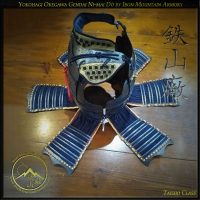 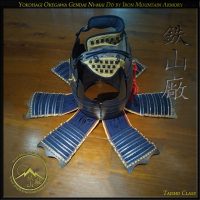 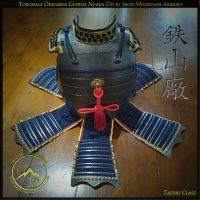 This Taisho Class Yokohagi Okegawa Dō is in stock, sold as seen and is ready to ship.  Sized to fit the average adult of 174cm (5′ 7″ +/- 2″) tall with a 108 to 112 cm (42 ~ 44″) chest.  Finished with Tetsu Nami and features blue odoshi with crimson accent lacing and gold / white mimi-ito  accent and wave pattern plating on the kusazuri (skirt).  Also features 2 holding rings at the waist.  This is a great opportunity to own a fine quality taisho class do to start or compliment your collection!

The Yokohagi Okegawa Dō  is one of the most common 16th-century styles of samurai armor used by high ranking samurai and ashigaru (foot soldiers) alike. The Dō  (breastplate or cuirass) is one of the major components of Japanese armor worn by the samurai class and ashigaru (foot soldiers) of Feudal Japan.  The Dō was considered the most essential part of armor and might be the only piece of armor worn by a low ranking samurai or ashigaru when going into battle.

As samurai armor advanced, the Nimai (Ni-mai) style of Dō  (2 piece) became the most common style, particularly the “Okegawa-Dō ” (tub-sided) which was made from riveted lamelle.  The simplicity in design, comfort, easy maintenance and very reliable in battle, made this style of Dō  the most common Dō  of ashigaru and high ranking samurai alike.  Although there are several styles of Okegawa-Do, the most common were crafted from 12 individual lames (front + back) and riveted together.   The more common was known as Yokohagi Okegawa-Do which featured a horizontal plate design.

This style of Nimai Do features smoothed countersunk rivets which are used to fasten the lamellae (plating) together creating a smooth finish.  Yokohagi is a horizontal plate design.  Okegawa (tub sided) is a ni-mai (2 section) Do (chest armor) joined together with a hinge, making a “clam shell” style of armor.  The traditional name for this style of Do is: “Yokohagi Okegawa Gendai Ni-mai-do”

This Taisho Class Do features a traditional pin hinge under the left armpit, to make a simple ni-mai-do, to better accommodate those with a larger or smaller chest.  The Tate-Eri (shoulder padding with kikko plating) provides added comfort and protection and can be replaced.

This is an in stock item and will ship within 3 to 4 days from date of order. Sold and shipped as seen.  We do have a bitsu for this do in our NY warehouse as well, which can be added to your order to reduce shipping costs.