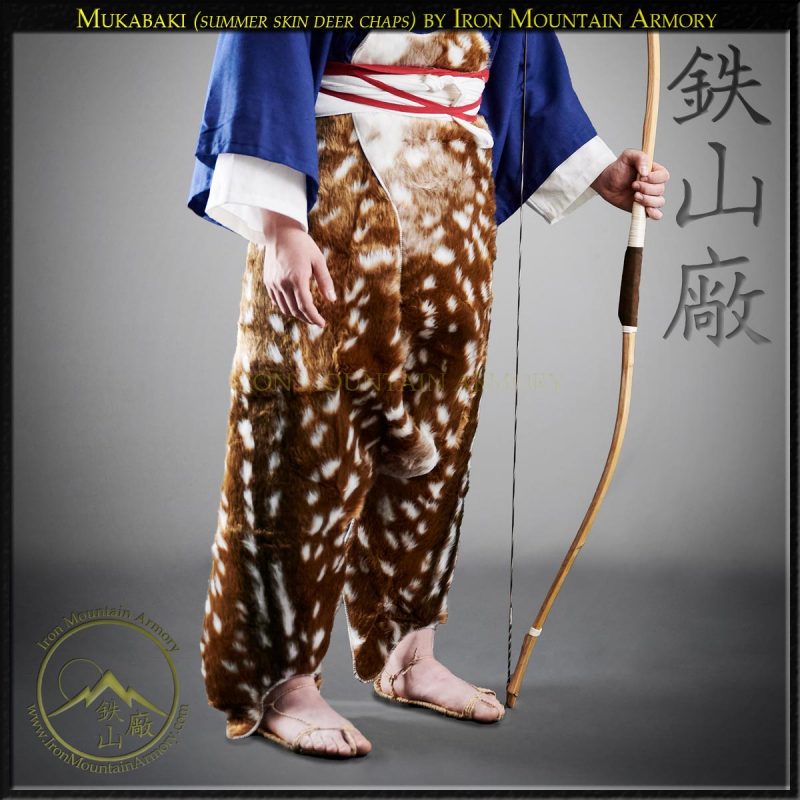 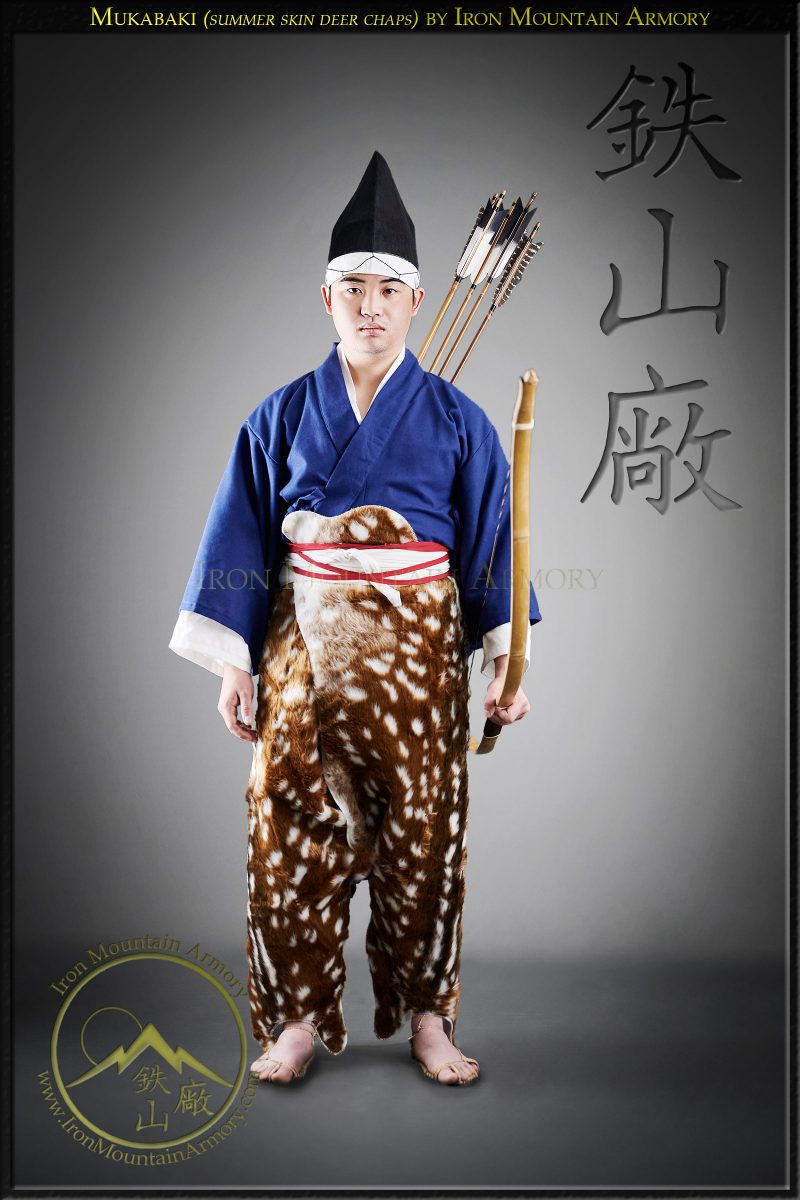 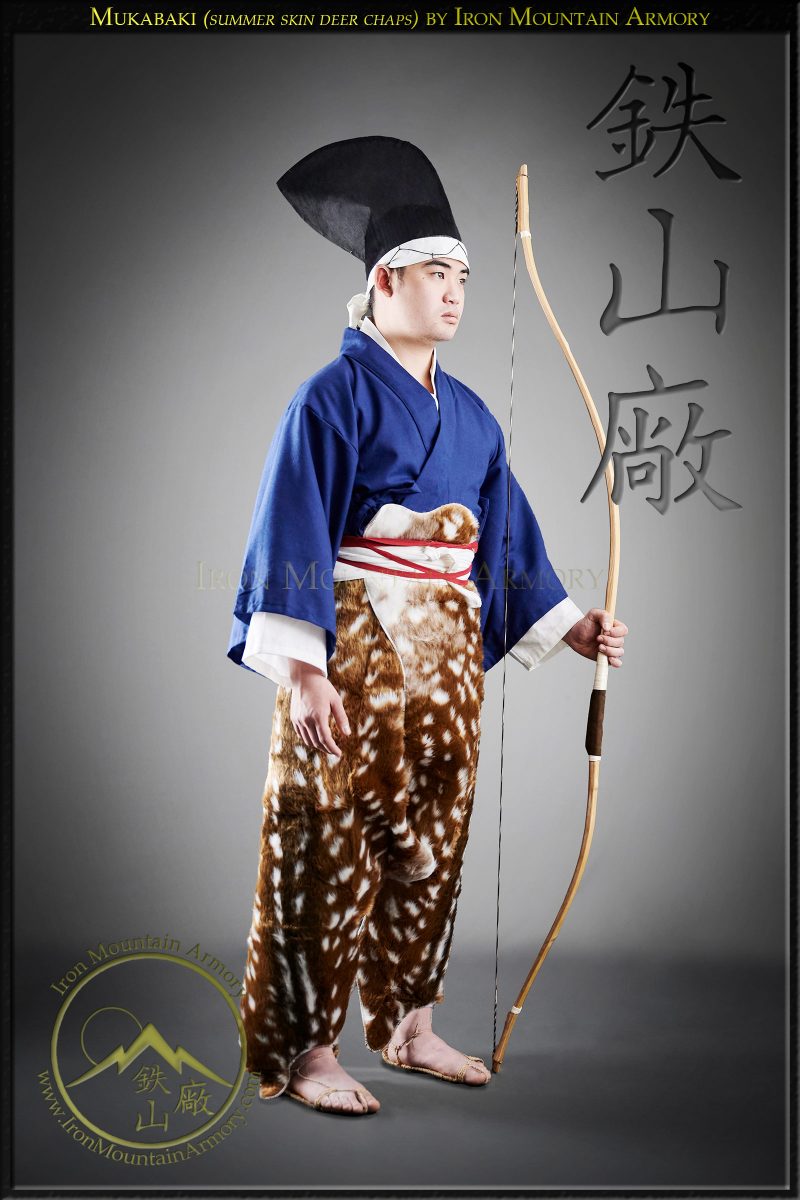 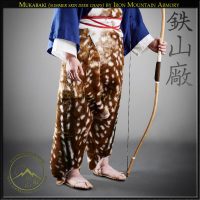 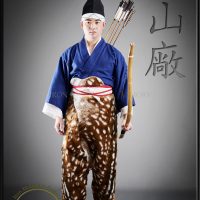 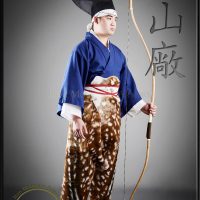 Mukabaki 行縢 or natsukagemukabaki are samurai “chaps” made from the summer skin of a Japanese sika deer.  Dating as far back to the Kamakura period (1192 to 1333), samurai would favor wearing the more costly and beautiful summer skins of the sika due to the soft brown fur with bright white spots.  The skin was durable as well, making them protective and easy to clean.  More commonly these skins were worn as chaps (leg coverings) for horse riding and hunting.  Today, it is the deer fur used in the costume of Yabusame, Natsume. This has become the formal wear of the Yabusame archer, and is also known as the “ageshozoku“.

Yuma Reiho is one of the equestrian techniques that has existed in Japan for more than a thousand years, and was originally a technique for hunting.  It used to be obsolete in the era of using ashigaru and teppo (guns), but nowadays, Yabusame is often used as a preservation society in each region, as a traditional culture for Shinto rituals and festivals, as well as for warding off evil and praying for birth. Yabusame is a competition in which you straddle a horse and shoot a kabura-ya (samurai arrow) while sprinting.  Also known as “Yabaseuma“, it is becoming more and more popular worldwide as one of the traditional martial arts in Japan. Best worn with an uwa-obi (outer belt) and over Traditional Tattsuke-Bakama (Samurai Pants).

Stepping from tradition and more into modern times, Iron Mountain Armory makes these mukabaki using synthetic deer skins.   These synthetic furs are 100 cm long.  They tie around the waist and the length can be adjusted by positioning on the waist.  They are considered 1 size fits most.  They are held in place with several straps and cords which can be adjustable for the wearer’s height and size.  You have the option of adding a trim along the edge of the modern samurai mukabaki.  We suggest adding the optional uwa-obi (outer belt) to your order as a belt will be needed to hold the mukabaki to your waist.

Be the first to review “Mukabaki (Samurai Chaps)” Cancel reply