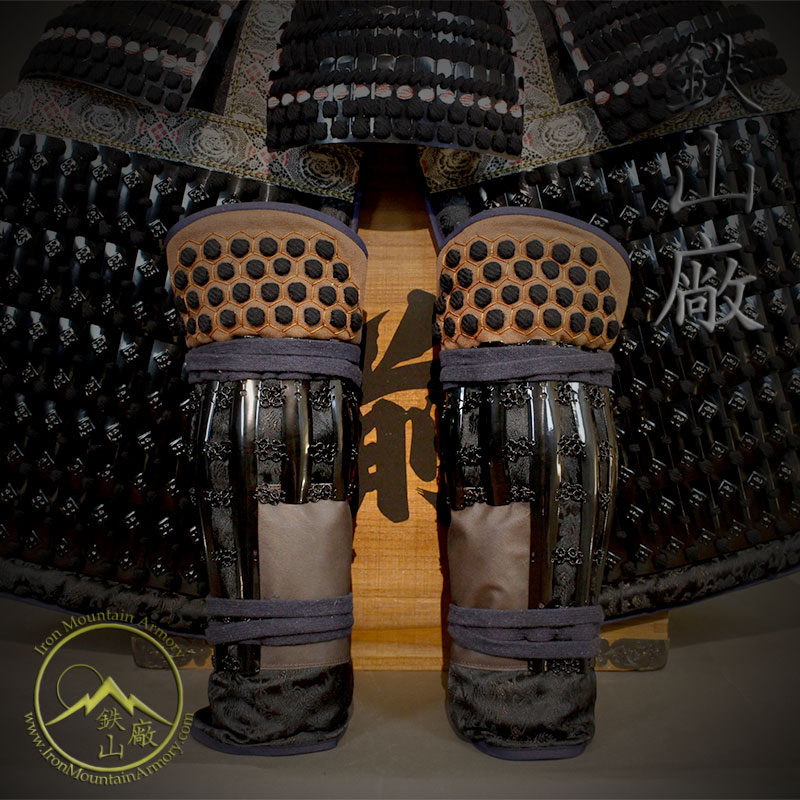 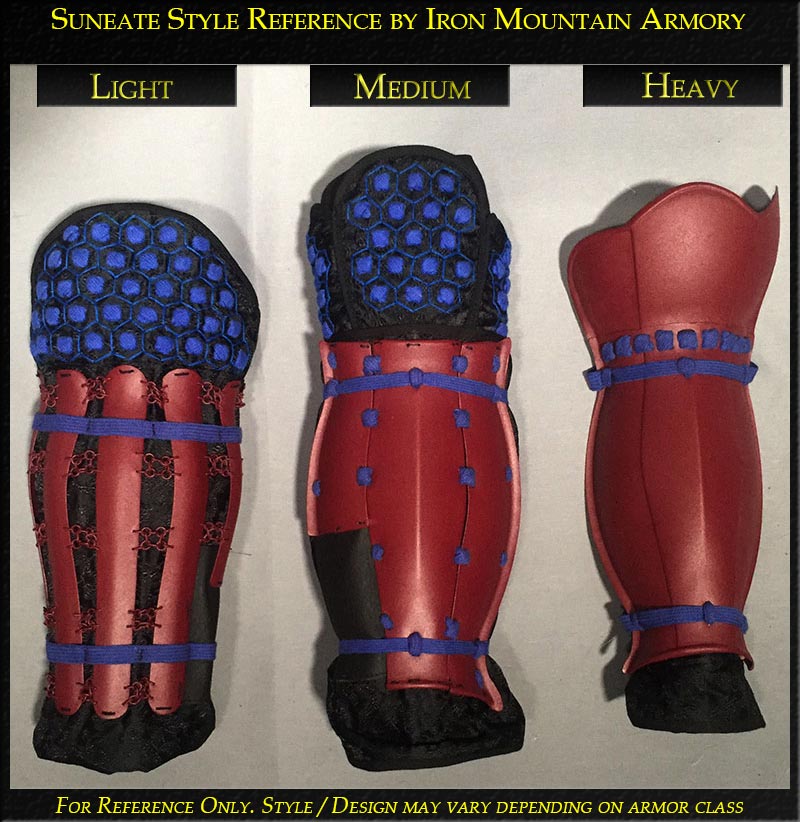 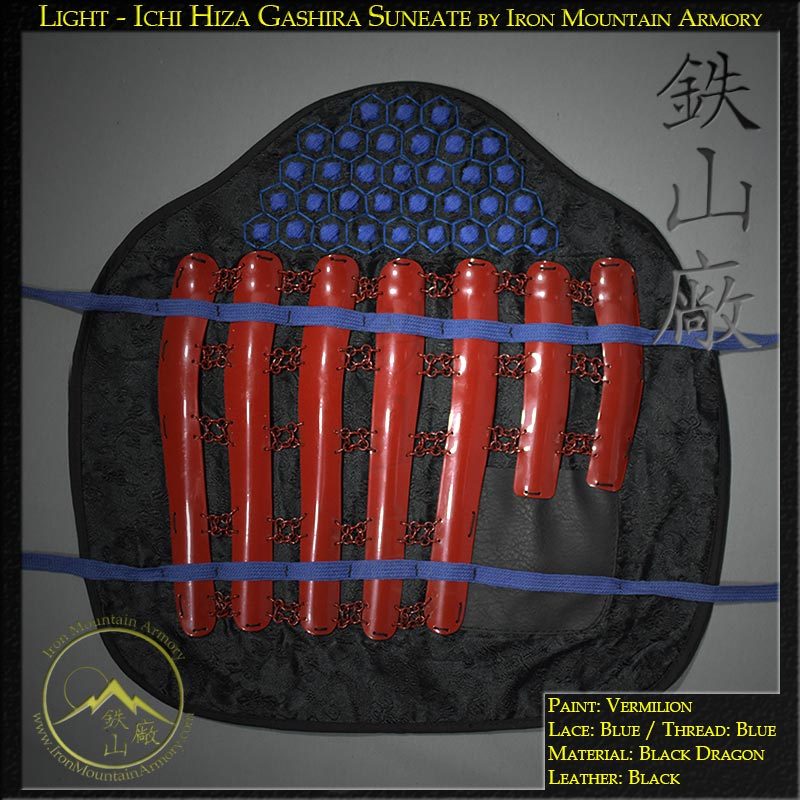 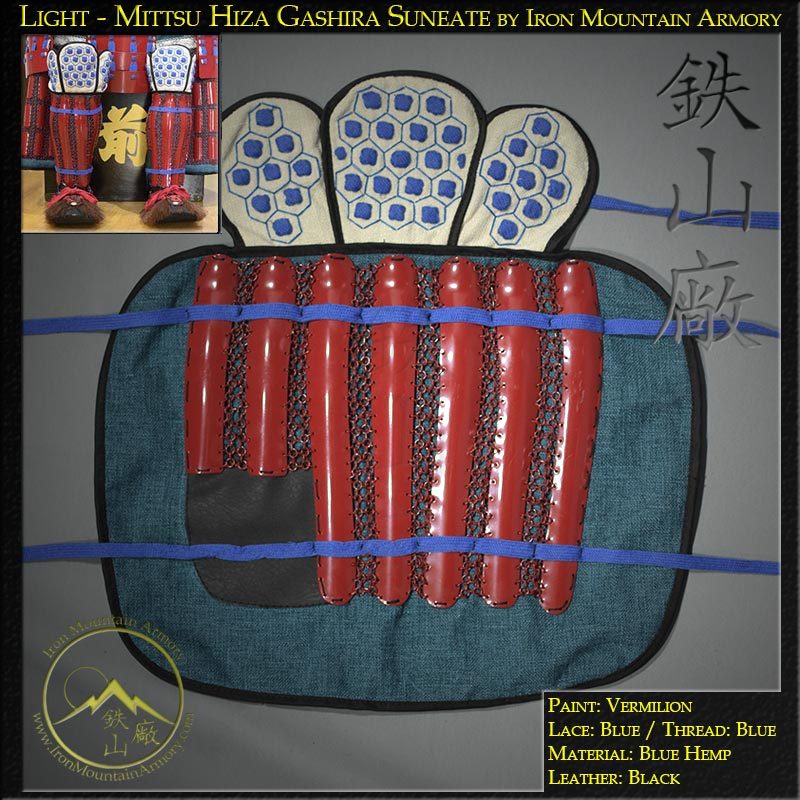 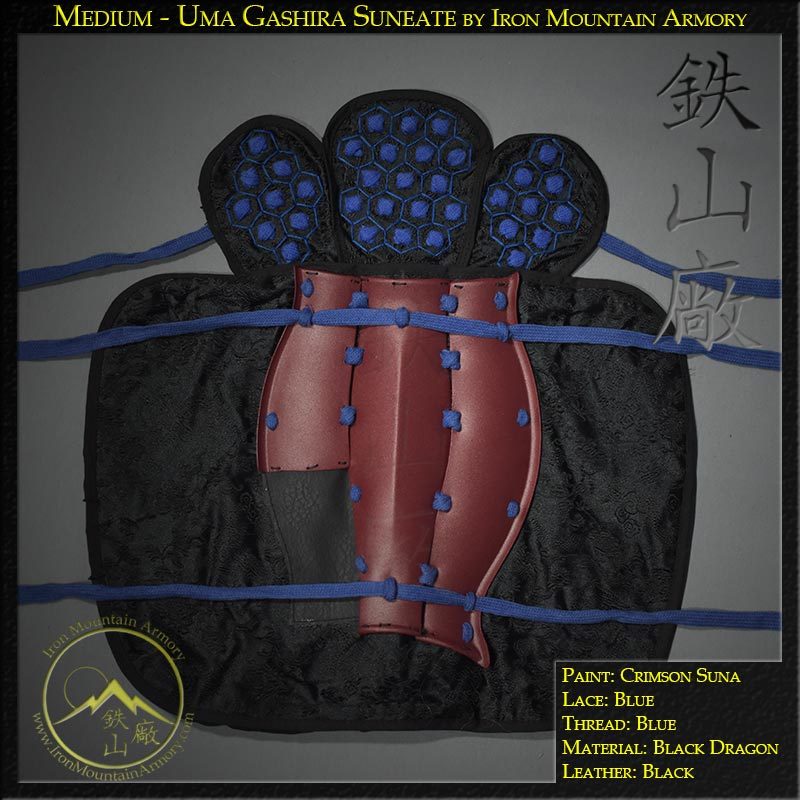 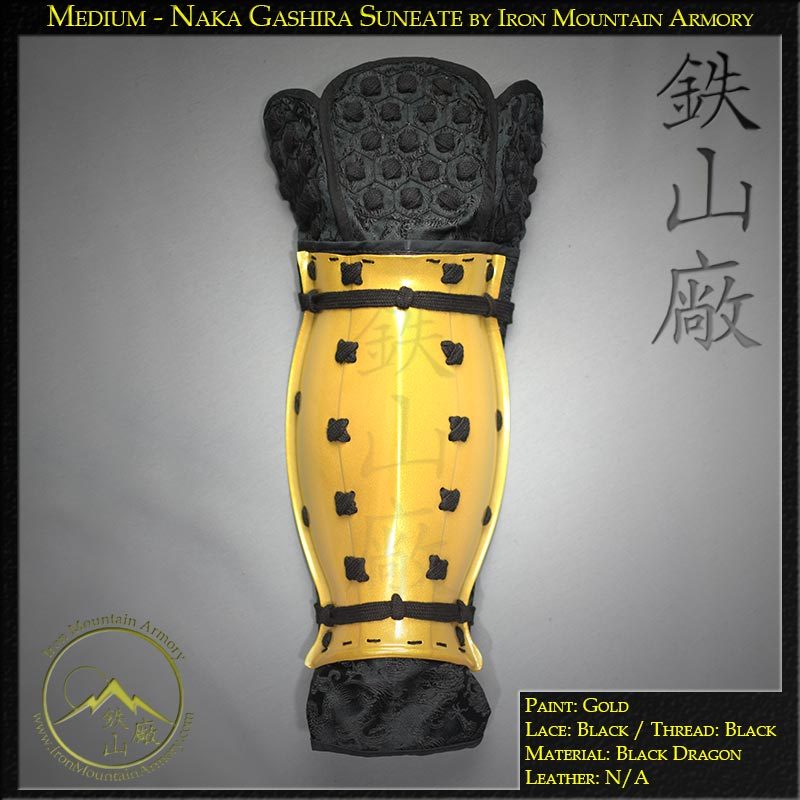 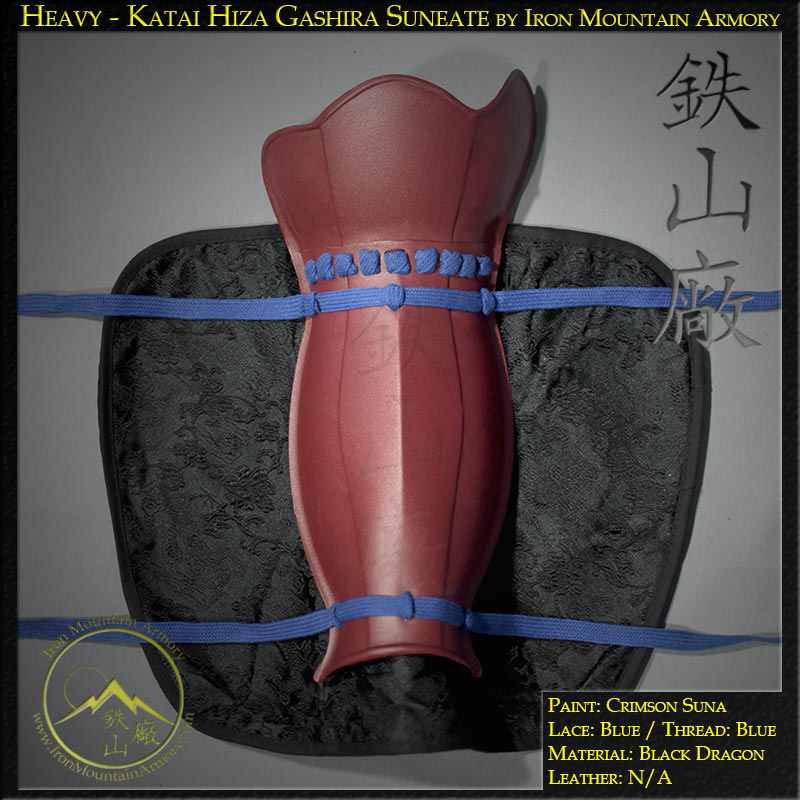 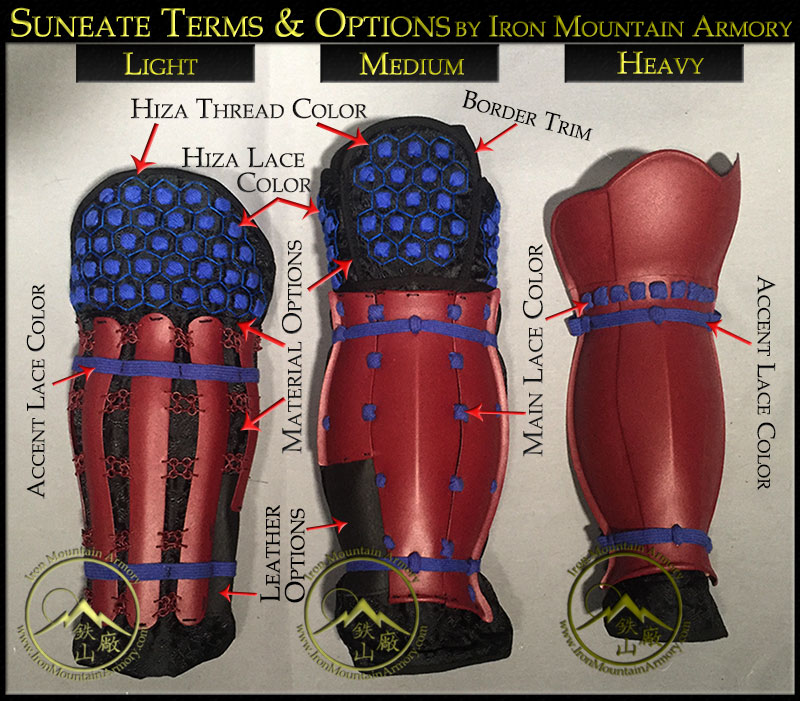 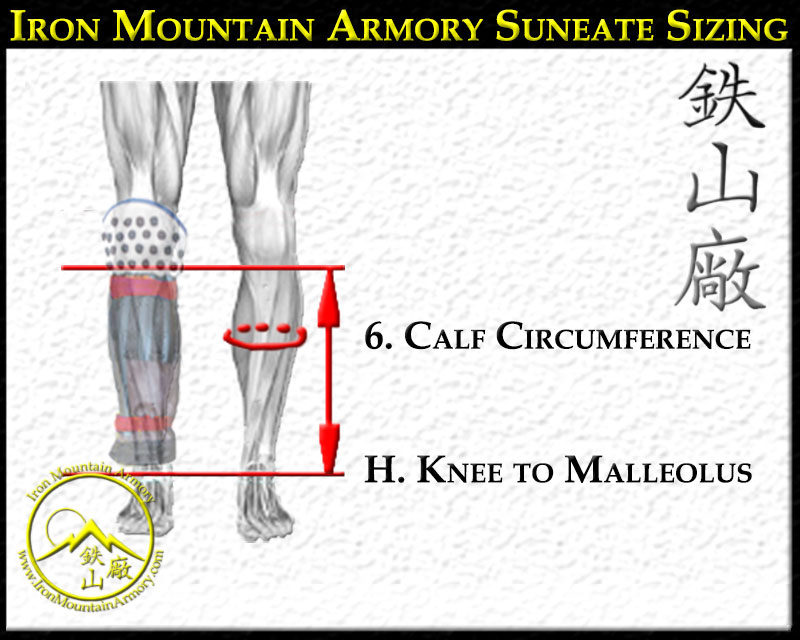 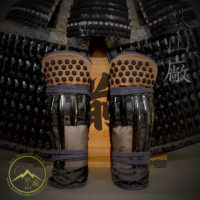 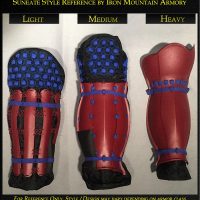 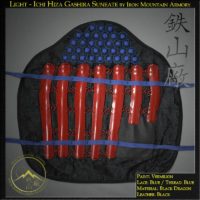 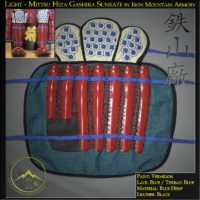 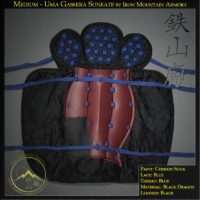 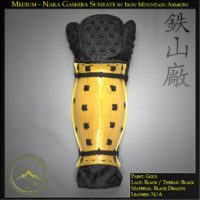 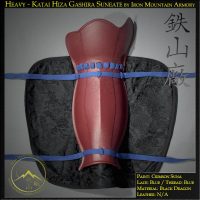 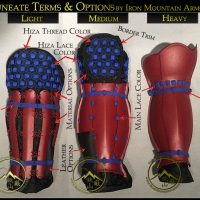 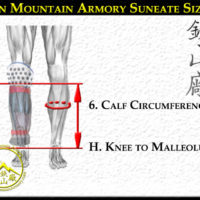 Our Gashira Class Suneate (shin guards) are one of the Sangu, or three the principle parts of Samurai armor. The sangu were originally designed to protect the extremities, with the armor protecting the shins. These shin guards tie comfortably above and below the calf, providing protection for the samurai warrior. There were many styles. Many of which have been replicated by Iron Mountain Armory in Gashira Class quality, for the modern warrior.

Shino Suneate (Light) – Shin guards that consist of splint plates and are connected by Kisari (chainmail), with a cloth backing. The cloth hiza (knee) would often have some padding and kikko (hexagon plates) for added protection. The shino suneate (light) where typically worn by light cavalry and would have featured leather padding on the inside calf to avoid chafing the horse (Ichi Hiza). Foot soldier samurai, would have used the straight splints without the leather, affording them a little more protection (Light Mittsu Hiza Suneate).

Tsutsu-Suneate or Bishamon-Suneate (Medium) – Plate shin guards were preferred over the shin. They consisted of three or more plates, joined with an odoshi (lace) or chotsugai (hinge), and with extensions to cover the front of the hiza (knee). The cloth hiza, would often have some padding and kikko (hexagon plates) for added protection. The tsutu-suneate (medium) where favored by all cavalry, and would have had leather padding on the inside calf, to avoid chafing the horse (Medium Uma Suneate). Foot soldier samurai favored this style of shin guard without the leather, affording them extra protection (Medium Naka Suneate).

O-Tateage no Suneate (Heavy) – This style is crafted from a single plate or three plates, laced or riveted together with a large standing cup shaped knee plate for added protection (Heavy Katai Hiza Suneate).

To learn more about the unique history and development of Sangu armor like the Suneate, you can read more in our blog article “About Sangu and Sode Armor Parts.”

Handcrafted at the time of your order by the Iron Mountain Armory. Please allow 2 weeks for crafting of this item.