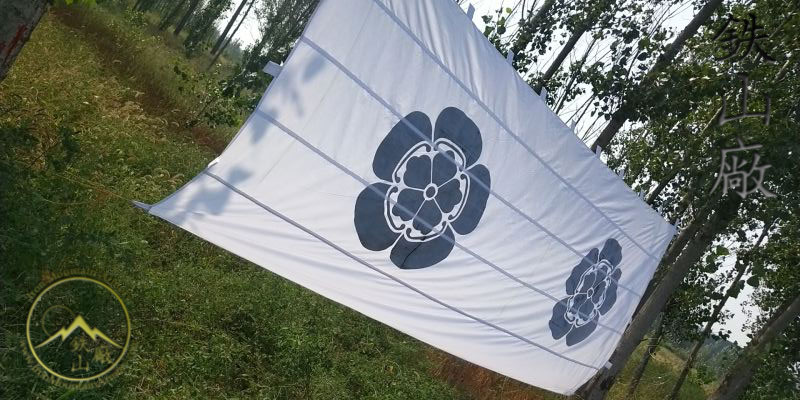 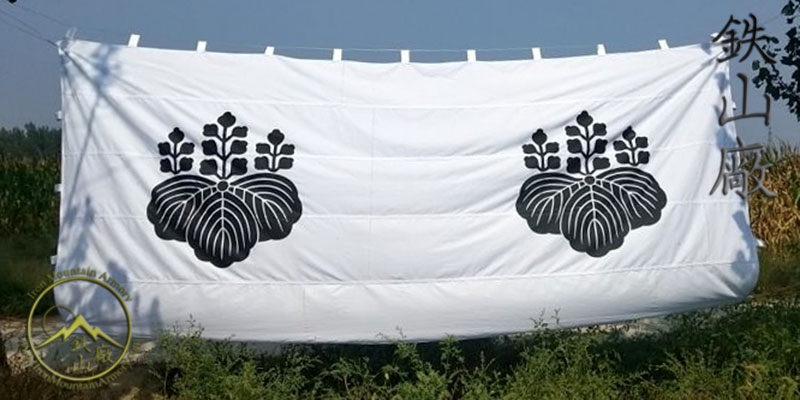 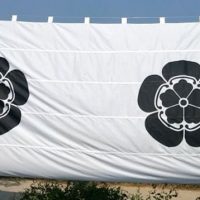 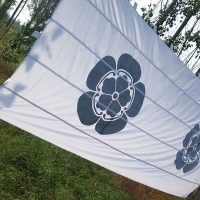 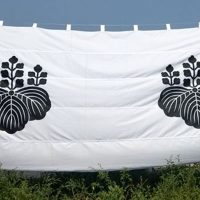 Jinmaku (陣幕 Jin-no-maku) also known as gunmaku (軍幕) are “military curtain” which are used to set up military encampment used throughout the Sengoku era (1333 – 1603) and Edo era (1603- 1868). Today the jinmaku are used for mostly symbolism and theater, in ancient times they were suspended by poles and stretched around military encampments. These gunmaku military curtains would provide privacy and some safety for the Daimyo, Taisho and samurai along with protection from the wind while sleeping. To counter the wind blowing against the jinmaku like boat sails, 9 monomi (eye holes) are made at even intervals according to the varying total lengths of a curtain.

The jinmaku has a history dating back as early as the Nara era (710 – 794) and written about in the Konjaku Monogatarishū. It was written that the samurai would sleep within the protective walls of the maku or ibaku (curtain), while the Daimyo met with their Taisho (generals) to plan strategies. This would become known as “bakufu” (幕府:ばくふ Government behind the curtain). There have been several variations of maku with the jinmaku becoming more standardized in the Muromachi era (1336-1573). Honchō Gunki Kō, is a military manual written during the mid Edo era by Arai Hakuseki, which outlines the details for making the jinmaku military curtain.

Iron Mountain Armory is offering several different standard options according to size and style of maku needed for different ranks and use. Each panel is made from asa (hemp cloth), stand at 1.83m (6′) tall and between 3.65m (12′) to 12m (39′) wide. Panels are available in white, black or blue hemp cloth and can be ordered in a single solid color or 3 colors (horizontal stripes). A clan’s mon or your personal symbol can be hand painted among 1, 3, 5 or 7 places. Sengoku ibaku will have either 10 (Daimyo) or 8 (samurai) tethers depending on military class requested. During the Edo era, military science became popular among the samurai, which have the making of the maku a more sacred and religious meaning. We will take this secret military science into account when crafting your Edo ibaku for you. The makukuji (幕串 tent poles) are not included.  Please Note: These traditional Samurai camp tent walls are as handmade and as traditional as possible and because of this they will not be perfect, so please be aware there may be some natural defects or blemishes.