In the noble and mysterious world of ancient Japan, there are 5 Important Periods of Samurai Armor Genealogy. This is a basic overview for the beginning enthusiast who wants to dip his toe in the deep pond of Japanese Samurai Armor. We will go into greater detail and begin to form a more detailed picture for collectors and hobbyists.

Our goal is to help readers gain a greater appreciation for the history which has gone into the creation of our armor while also creating a context for the different styles we offer.

As with any historical account there are a few factors which affect how we view and receive the five great periods of Japanese Samurai Armor Genealogy. They are the following:

Conflicts of Bushido Code. In Hollywood and storytelling, ideals and values are often romanticized and exaggerated. This is what captures our imaginations and causes us to fall in love with the culture. The reality is often much more complex because we are, after all, human.
Our discussion here, will give you the fast and dirty overview of Samurai Armor Genealogy, while taking into account the previous points we discussed. 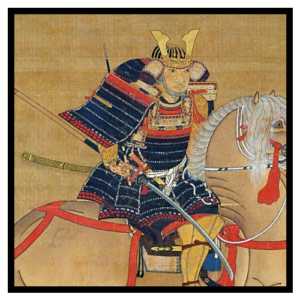 This early era was characterized by the “lamellar” style. It was a basic and essentially weak armor style which was backed up by a strict and traditional moral code. In this era, landlords fought each other one-on-one in situations based on neighborly conflicts, offense and desire for riches, power etc. Much of the attack styles relied on a lord arriving on horseback with retainers who carried his armor and came to his assistance as needed or able.

The armor of this period is typically big, bulky, and based on Pig Iron. This alloy was very weak and fairly easy to break when struck hard enough. The pieces were usually held together by leather or silk lacing. During this period, rivets and rudimentary hinges hadn’t yet been incorporated into armor craft. At this same time, glory was the goal with prizes being awarded according to the rank of the person killed in battle. Pedigrees and achievements were shouted to opponents to initiate the conflict, and melee style tactics ruled the day. Learn More >> 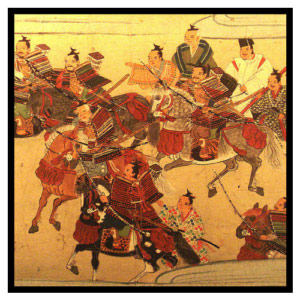 As the Muromachi period came into force, there were distinct changes in the way the Samurai fought. At this point they had suffered some tremendous defeats at the hands of the Mongols and began to change tactics. Also, the warlords had more foot soldiers to do their bidding and avoided confrontations a bit more than in the Heian period.

During this period the armor became focused on movement and flexibility via scales which could be small triangular shapes or slightly larger and rectangular. The warrior would wear a “Iyozane,” or “Kozane”, or scale armor. They also used a type of chest plate which would wrap around the front of the torso and tie in the back, called a haramaki. Armor from this period was very costly, difficult and time consuming to make. The general appearance was colorful and included family symbols of importance. Gendai reproductions mimic the original appearance in quality and usability. Crafters may use modern techniques to make it more economical, and accessible to common collectors and martial artists 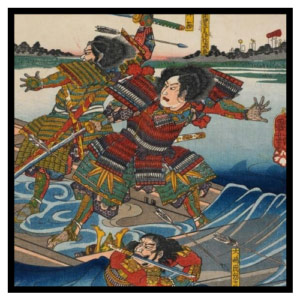 This era, also known as Warring States, was brutal and full of social upheaval. The armor reflects this as it becomes much more simple with darker colors and more focused on functionality over appearance. Towards the end of this period there was more interaction with Europe and the influence is reflected by some of the newer combat styles and armor types.

Along with these new combat styles and armor types, the costs are diminished by better technology and a faster production process. Instead of scales, bigger plating designs came into play which mimicked “kozane” armor designs. It was faster, more economical and easier to make, but less flexible.

In this design the Do (chest plate), now closes around the chest and under the right armpit utilizing a hinge under the left armpit. This design became known as “Tosei,” and is a modern style influenced by European armor of that period. With these cheaper designs, the “daimyo,” or assigned regional governor, now has the ability to conscript more peasant soldiers into their army with a smaller investment. Learn More >> 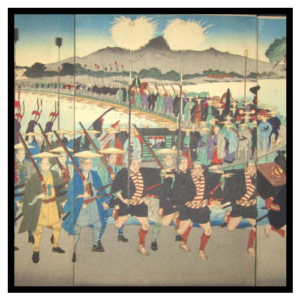 As the Sengoku period came to an end, so did much of the upheaval. This era is marked by an explosion of art, culture and literature.  As a result of the peacefulness of this period, Daimyo and Samurai warriors now spent less on military campaigns, and more on embellishment of their swords and armor. This resulted in armor that was functional for military actions, but more ceremonial and ornate in nature. During this period chainmail and defensive armor also came into play. They could be hidden or designed to look like a normal part of their clothing, like kusari, tatami or kikko plating.

The armor during this period, involved more gold plates, metal alloys and European materials which have more eye appeal than earlier versions of Muromachi and Sengoku. Antique armors found on the market today are beautiful and full of design elements. Gendai armor is often based on this period. In some cases, Sengoku yoroi were restored or updated with Edo period designs and materials. The scales continued, but became a mix between earlier Muromachi and late Sengoku (Tosei) design armor. This became the basis of Gendai armor from this point onward. Learn More >> 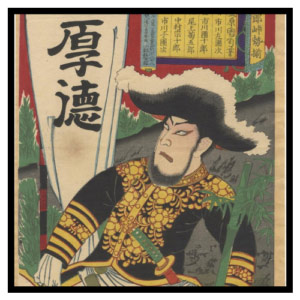 The rise of the Japanese Empire characterized the Meiji Period. This armor style is called “Gendi.” It was less focused on complexity and involved more modern materials, paints and styles which by now had been incorporated from European styles.
Armor of this period may look like a molded body cover with a coating of coconut husks and/or leather, then covered with a type of resin for eye appeal, prevent rusting, protect it from weather and to hold it all together.
This period is the final end of the samurai. Due to the European influence and culture, the idea of a strong central government took precedence over the regional leaders which characterized the samurai tradition. To break the power of the samurai they were abolished and their culture became a romance of the Kobuki theater and woodblock printing.

As ancient traditions were lost, and the Bushido code became romanticized, so did the art of crafting the armor of the samurai. This is why we work with crafters worldwide in the study and preservation of this art which is quickly fading into obscurity.

Iron Mountain Armory is doing its best to learn, develop and uphold these ancient traditions while crafting historically accurate and economical Gendai reproduction samurai armor. As we learn we will continue to improve.

Now that you know the basic history of each period you can choose the armor which you feel is right for you and your interests.

Armor made by Iron Mountain Armory is made with laminated plating based on original period designs and styles. It is designed to flex and absorb impacts without breaking while allowing for climbing, running and even subtle movement. We can even offer equipment which is guaranteed to stand up to mock-play, budo training, heavy hits or even full warfare depending on cost and style.

For more information about the durability and strength of our armor, take a look at the following video where we put our gear to the ultimate test!

1: Arms and Armor of the Samurai: The History of Weaponry in Ancient Japan (1995) I. Bottomley & A.P. Hopson

Disclaimer: We always try to show pictures and describe our products in terms which are most generally accepted by the academic community. 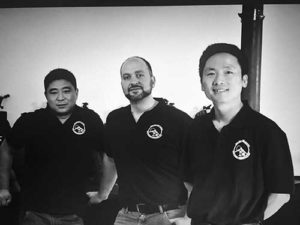